In my previous post, Hookswood Rd Fire, I expressed my frustration at the incompetence of Qld fire & rescue who took control of all efforts to fight a fire and by their inaction causing a big fire to grow to something far more dangerous and destructive. I was also angry to learn from those who were on the scene on the Sunday, Monday and first thing Tuesday before I was called in as part of the Downfall Creek rural fire volunteers, of 3 occasions were the fire could have contained as a small fire and that on 2 of these occasions the opportunity wasn’t taken because of blindly following of the rule book by Qld fire & rescue.


Having hours of inaction on my hands during Tuesday and hearing the outrage of my fellow rural fire volunteers I made sure that their views became known to the media. These two articles are the result –
Heat on resourcingas fire threats intensify
More RFS review forQld 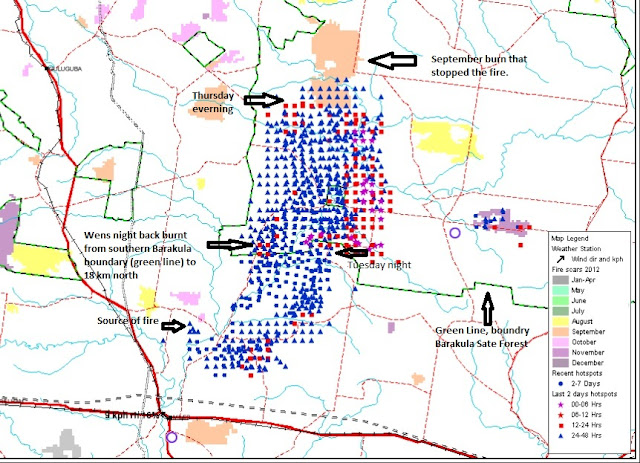 This image above was developed from the NAFI web site gives the perfect illustration of why preventive burning is very important. http://www.firenorth.org.au
The image also shows what sectors of the fire the Downfall Creek brigade played a part.


On Tuesday night our crew joined others to back burn to save property of a family. The Qld fire & rescue incident controller would have had a heart attack if he knew that we went to the lead of the fire yet many km’s away. The sky glowed red, thick smoke billowed overhead and the roar of the fire was enough to strike fear. Earlier we had sighted a spot fire start up 1km in advance of the fire front. We knew of nothing that would stop this fires advance. We left that location to go back to burn a wide band around the house and buildings.


The Downfall Creek rural fire brigade operated within the Barakula State Forest at the western flank of the fire from Wednesday afternoon to Thursday night. The forestry fire fighters were on the eastern side of the fire on the Wednesday and could only bring equipment to the western side on the Thursday. When the forestry workers shift changed soon after dark on Thursday we learnt from the shift supervisor what stopped the fire front from going any further. On Wednesday night he was just off to the east of the lead of the fire front. At 3am the fire was still crowning, that is burning in the tree tops, when it hit an area that had a preventive burn back in September. In the image above it is the peach colour area. The fire lost its ground fuel source and bit by bit died down to a halt.


Look at the image to see how few preventive burns have occurred in the fires path, both in privately held land and the state owned state forest. There was a large fuel build up in this area. You don’t need to be Einstein to know that fuel load plus hot temperature plus ignition equals destruction. More needs to be done to encourage cool burns in August and September.
Photo - Wens night in Barakula State Forest
UPDATE #1
In this article from September 2009, Guest post: Barakula state forest to be converted into a national park , retired forestor Peter Lear warns of the  inevitable destructive fire event occuring.

Roading systems are allowed to revert to scrub and very little controlled burning is done. Fuel build up will eventually lead to fire which in the case of Barakula will destroy 100 years of sustainable forest management in the cypress forests. Barakula endures regular periods of severe fire risk, so it is not a matter if fire will occur but when it will occur. The resultant devastation will be dependent on previous controlled burning regime and the management of the particular wildfire, which is very difficult without good access (roading) and trained staff.

Welcome to a place that has a focus (but not exclusively) on regional and rural Australia open for anyone living anywhere to read, learn and interact. Please feel free to make a comment.

You can use some HTML codes such as, a for active; b for bold; i for italics

[Click Here] for a link to another site where there is a very good simple explanation.